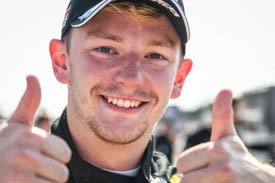 Belardi Auto Racing has confirmed their second driver in as many days as Toby Sowery will be back for his sophomore year in Indy Lights.

The 23-year-old raced the full 2019 Indy Lights season, scoring a win at Portland and seven podium finishes en route to finishing third in points. Sowery will race alongside Rasmus Lindh as the Brownsburg, Indiana squad tries to win their first Indy Lights championship since Gabby Chaves did so in 2014.

“I’m super excited to be back competing in Indy Lights,” said Sowery in a team release. “It’s been a long winter since WeatherTech Raceway Laguna Seca and I’m pleased to have landed a great position with Belardi Auto Racing. I’m confident the team will give me a platform that allows me to focus on my performance. I also have a strong teammate to work with so we should expect to be very competitive. I’d like to thank my sponsors and Brian [Belardi] for making this year possible.”

This will be Sowery’s fourth year racing in America. In 2017, the British racer competed for Team Benik in the USF2000 race weekend at Barber Motorsports Park and in 2018 competed for BN Racing in the Indy Pro 2000 weekend at Road America, scoring a pair of runner-up finishes.

“We were incredibly excited when we were able to sign Toby for the 2020 season,” said Belardi in a team statement. “Last year coming into Indy Lights and being a factor right away definitely caught our attention. We have high hopes for Toby this year, and really think he will be a major asset to the team.”

With the Belardi announcements, that brings the 2020 Indy Lights field to a confirmed nine entries with a week to go before St. Petersburg. There have not yet been any announcements from Juncos Racing on their entries, Andretti Autosport on if they will run a fourth car and it is unknown if Jay Howard Driver Development will run a driver during the season with the car they acquired this offseason.